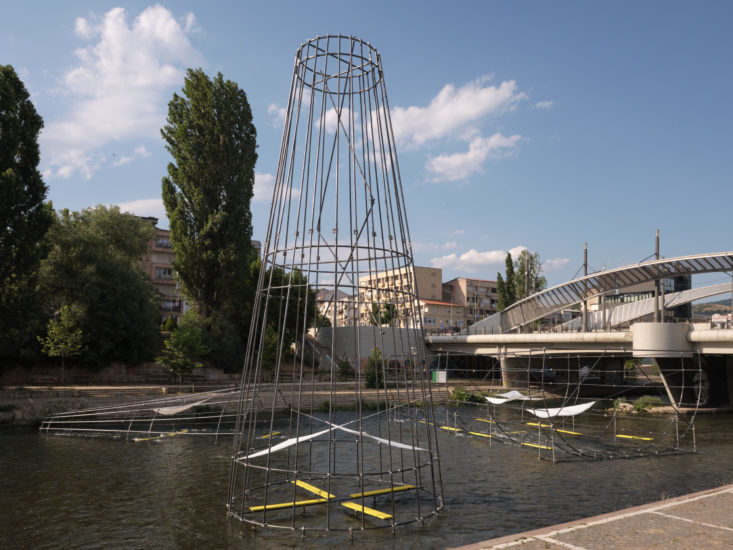 Stanislava Pinchuk has been invited to the 14th European Nomadic Biennial, Manifesta, held at Prishtina, Kosovo. Inherent to Manifesta’s nomadic character, each edition is hosted in an altering region, creating an interface between international artistic and intellectual debates and the specific qualities and idiosyncrasies of a given location. Manifesta investigates the emerging developments in contemporary art and culture set within a European context. While mapping new cultural topography, it engages the audience with new aspects and forms of artistic expression including innovations in curatorial practices, mediation, and education.

Pinchuk presents, Europe Without Monuments, a multifaceted sculptural installation that functions as both a playground and pavilion. Placed at the heart of the Ibar river by Mitrovica’s newly built bridge, its three forms are taken at scale from Mitrovica’s iconic concrete Monument to Fallen Miners. Built by architect Bogdan Bogdanović, it commemorates the unified revolt of Albanian and Serb workers from the Trepča mine against Nazi occupation of the city.

Following the atrocities of the 1998-99 war, the Ibar river segregates the city of Mitrovica into primarily Serbian north and Albanian south banks. With varying languages, religions, mayorships, and currencies, the geographical split has established itself as a barricaded point of tension and a witness to sporadic ethnic violence. Bogdanović’s trilith has remained a monument of friction, weighing heavy with the promise and betrayal of Yugoslavia.

Bogdan Bogdanović, a Serbian humanist and intellectual, with ancestral roots in Kosovo, was a publicly outspoken critic of the rise of Yugoslav and Serbian politician Slobodan Milošević’s nationalism. In his last interview, Bogdanović wished that he never had to build such monuments:

Pinchuk’s Europe Without Monuments is fabricated from steel and zinc, materials that are still currently mined in Mitrovica. Like a shimmering whale skeleton washed ashore, the deconstructed scaffold of Bogdanović’s trilith is reconceptualised as a playful point of congregation in a city, allowing new narratives to form in a hollow husk of a monument.

Europe Without Monuments is staged at Ibar river, Mitrovica until 31 October 2022 as part of the 14th European Nomadic Biennial, Manifesta.